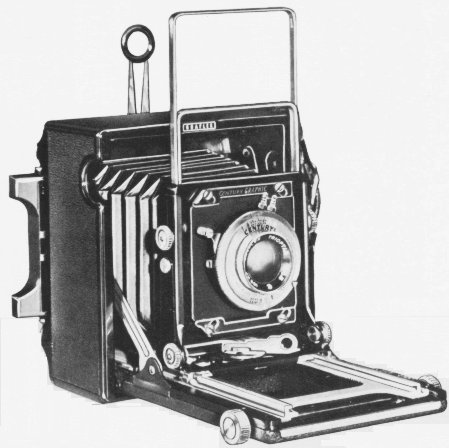 The Century Graphic is a cost-reduced Miniature Pacemaker Crown Graphic, made of ``Mahoganite,'' which is a kind of plastic. It comes with the highly-desirable Graflok back molded in as an integral part of the case. It also lacks a body-mounted shutter release, and is often found with a second-grade lens, such as a triplet, instead of the Tessar type lenses found on the miniature Speed/Crown Graphics.

The standard low-cost Century Graphic has the 103mm Graflex Graftar f/4.5, an astigmat lens in the Century shutter, with built-in M-F flash synchronization and speeds from 1/10 to 1/200. Other option lens equipment included the following lenses, all (presumably single) coated:

Other good lenses which cover 2x3 and fit the lens board include the Wollensak 65/6.8 Graflex W.A. Optar and a similar Schneider Angulon.

The 101 mm Wollensak Raptar and OEM variant Optar are 4-element Tessar type lenses, as are the 101mm Kodak Ektars (f/4.5). There are also 105mm f/3.7 Ektars (and the occasional f/3.5 100mm Ektars) which are 5-element Heliar lenses. (The 100/3.5 Ektar from the Kodak Medalist is quite good, and can be used on a Centiry Graphic.) A few of the late production Century Graphics were shipped with the Schneider 80mm/2.8 Xenotars.

You may also adapt lenses from the Graflex XL, among those are 100mm Zeiss Tessars and 80mm Zeiss Planars.

The Century is thin enough to focus a 47mm WA. The limit of bellows draw is around 150mm for a non-telephoto lens. The 8" Tele Optar telephoto is a true telephoto, which means that even with its 203mm focal length, it has a short bellows draw of 180mm.

If you change lenses, you should be able to adjust the optional side-mounted Kalart rangefinder for up to about 135mm, but not anything much longer.

The Graflok back, being molded into the case, is not an accessory, but it is a highly desirable feature, since of the 2x3 Graphics, only those with Graflok backs can easily be fitted with roll film backs.

The side-mounted Kalart rangefinder was an option, and is quite useful. The top-mounted optical tube viewfinder is also an option.

A pistol-style grip, the Graflex Multi-Grip for Century 23 (Catalog 9#9127) was offered for Century Graphics, to improve hand-held photography. It attaches by a tripod screw and provides a thumb-actuated shutter release. The grip also fits the Graflex XL.