Graflex manufactured a series of single-lens reflex cameras in 2x3, 3x4, 4x5, and 5x7 sizes throughout its history. All models have a similar appearance and similar basic functionality, and are generally referred to as ''Graflex'' cameras, in contrast to the ''Speed Graphic'' or ''Graphic'' models.

This page describes the last models produced, the Graflex R.B. (revolving back) Series D and Super D. The Super D differs from the Series D in providing an automatic diaphragm setting capability in the lens, and a built-in electrical circuit for automatic open-flash photography.  See the Online Manual for the RB and earlier series Graflex reflex cameras.

Photography with the Graflex is built around two simple components. The first is a reflex viewing-focusing optical system that shows on a ground glass an exact, erect image of the schene to be photographed, without parallax, and with the same depth of field as the image on the film.

The second is a focal plane shutter which gives a wide range of exposures up to 1/1000 second. You will also be able to use a wide selection of sensitized materials because of the various types of holders that can be used with the Graflex.

Viewing and Focusing with the Graflex

The camera is normally operated at waist level. The top of the Graflex is pulled up and back to extend the focusing hood.

When the knurled focusing control is turned forward, the carrier and lens are moved into picture-taking position. The front door is automatically released so that it snaps up as the lens moves forward. Light enters the camera through the lens and is reflected upward by the mirror to the ground glass. The visibility of hte image is improved by the focusing hood.

When the release lever is tripped, the mirror automatically lifts clear just before the focal-plane shutter makes the exposure, tso that light from the lens passes directly to the film.

An automatic diaphragm is provided on the Super D Graflex. This camera can be focused with the lens wide open. The diapgram then automatically resets itself to a preselected lens opening while the mirror is rising before exposure. This feature makes accurate focusing more rapid and certain. 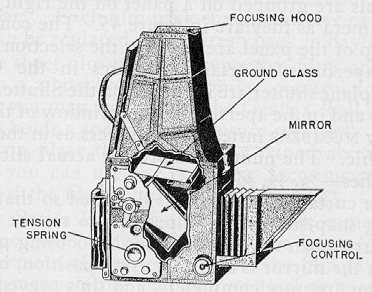 The Shutter of the Graflex

The focal-plane shutter in the Graflex is the same as as that built into the [Anniversary] Speed Graphic.

With the exception of the release lever, all shutter controls are grouped on a panel on the right side of the camera. The controls at the top of the panel are used for the selection of curtain apertures. Curtain apertures in the Graflex focal-plane shutter are indicated on the Shutter Speed Table and in the aperture-setting window of the camera by numbers, instead of by letters as in the Speed Graphic. The numbers represent actual slit widths in inches -- 1/8, 3/8, 3/4, and 1-1/2.

The controls which are used for the selection of curtain tension are at the bottom of the control panel. The shutter should always be set at the lower tension when the camera is not in use.

A highly corrected f/4.5 anastigmat lens with a focal length of 7-1/2 inches (190mm) iis standard equipment on all 4x5 Graflex cameras used by the Navy. The lens is equipped with an iris diaphragm between the cells.

Four types of film holders are available for the Graflex. All are interchangeable and have a simple, positive means of attachment to the camera. 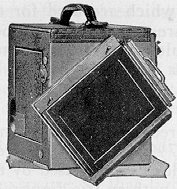 Whenever you place the camera on a tripod above waist level, you can use the accessory focusing panel in place of the film-holding accessories.

The Super D Graflex is equipped with a built-in electrical circuit, switches, and recepticle. These features permit the use of a Graflex Flashing Unit for automatic open-flash work with flash bulbs. The Flashing Unit consists of a battery case, a reflector, a socket to hold a flash bulb, and a connecting cord to connect the battery case with the electrical circuit in the camera.

Uses of the Camera

Its reflex viewing-focusing system makes the Graflex particular suitable for photographing action in a limited area. It is equally suited to photographs which must be made hurriedly.

Do not use the Graflex under lighting conditions which are so poor as to nullify the advantage of the reflex focusing system. The Graflex should never be substituded for a view camera for close-in architectureal work where view camera movements are needed to obtain proper perspective. Do not use the Graflex for photographing near-by action such as aircraft carrier landings. Whwen you are peering into the focusing hood, dangerous activity may come too nera before you detect it.

The Graflex is best suited for --

The Graflex may be used for --

The Graflex is unsuited for --

The illustrations and text in the preceeding discussion are largely taken from Photography: Naval Training Course, Vol. 1, NAVPERS 10371-A, prepared by Bureau of Navy Personnel, 1951.